This card was inspired by my curiosity about making a teepee card and for a Craftworld.com challenge to make an autumn birthday card. Video influences include Karen Burniston, Sam Calcott and Jennifer Mcguire’s takes on pop-up cards, teepee cards and peek-a-boo doors.

Teepee cards-so named because of the shape, are easy cards to construct from three squares of cardstock that are all the same. You score each diagonally from one point to the opposite point and fold in half to form a triangle. Then you glue one of the squares to the left side triangle and another square to the right side of the triangle/center square. I recommend watch Sam Calcott’s Mixed up Crafts video for a step by step. (My card is based on three squares of 5 ¾ inches squares.)

I wanted to add something new to the teepee card concept and having just watch Jennifer McGuire’s video on Peek-A-Boo Doors, I decided to add some flaps using the smallest circle die in the Lawn Fawn circle flaps dies. Because I wanted to use the flaps as a platform to set a small animal on using a pop-out cube, I needed another layer of paper on the card over my card base. (My card used textured orange paper cut from 5 ½ inch squares.) I also cut two additional circle flaps from the same orange paper to inlay behind the flap door. The pop-up cube to support an object is common, but I really learned the power of it from Karen Burniston’s Frame Pull Pop-up. 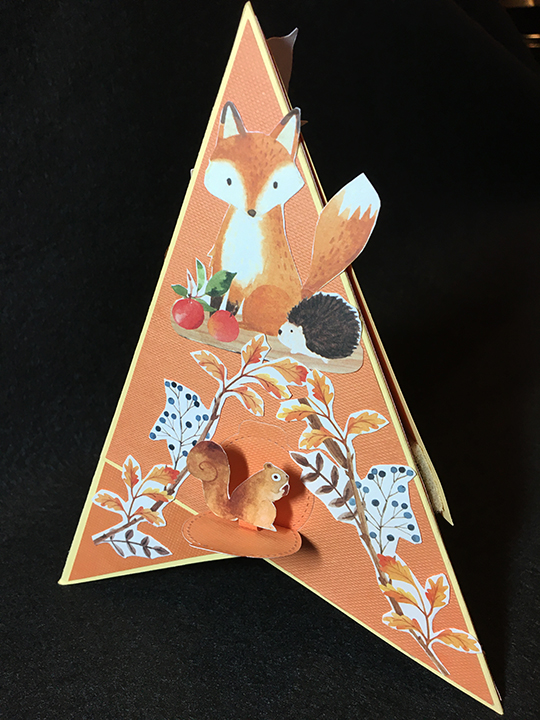 I fussy cut all of the card’s flat decorative critters and foliage form one page out of the Craftsmart Spiced Pumpkin paper pad. The happy Birthday rosette is made from a foiled topper from a card kit and ribbon gathered by needle and thread and then glued to the back of the topper.

The back side of the card has a white triangle for a personal message. The card is secured with a hook and loop square glued to one corner of the back flap and the connecting triangle.

Designed for a catalog envelope (9 inches x 6 inches), the card will fold flat to fit into the envelope. A small diagram is enclosed with the card so the recipient will know how to stand it up for display. The back flap of the envelope was stamped with a fox.